Tugboats work to rule: As from Monday April 12th the tugboats are limiting working hours to 12 hours per day. Starting at 0700 until 1900 hours. This is nationwide action and the only exception is the port of Buenos Aires. Additionally they will not be rendering “special” services, such as assistance during groundings or accompanying vessels.

River Parana Draft: According to estimates issued by the INA (National Water Institute) the average sailing draft is expected to stabilize around 10.10 meters fresh water for April, May and June. For the maximum River draft to be at 10.36 meters (34 feet 00 inches) the River height has to be over 2.00 meters. Please see the table below prepared by INA (Instituto Nacional del Agua). 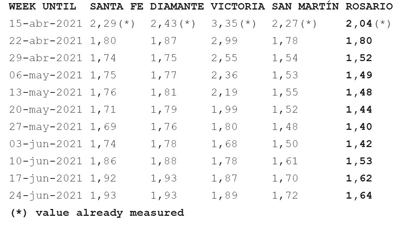 Covid-19 Quarantine Restrictions (Update): As from midnight, April 15th, the Greater Buenos Aires area went into lock down for at least two weeks. Schools are closed and no circulation in the streets is allowed between 2000 and 0600 hours. Upriver, Necochea and Bahia Blanca for the moment are not included. The maritime industry is not affected as it is considered “essential”.

Crew changes prior arrival in Argentine ports: The Sanitary Authority have become more strict on health checks for all vessels arriving within the 14 day quarantine period. They are taking special care with vessels that have changed crews in Brazil. The following list of requirements are asked to be presented prior granting Free Practique:
-Maritime Declaration of health.

Asian Gypsy Moth Inspections in Argentina: Same as is happening in many other countries Argentina will also start implementing inspections on all vessels coming from Far East Pacific ports on account of Asian Gypsy Moth. The inspections will be performed by SENASA (National Animal and Vegetable Health Service) as from April 12th, 2021. All vessels that have called at ports in China, Koreas, Japan and Far East Russia within the last 24 months (2 years) will have to be reported by Agents to SENASA. If the vessel has called at these ports between April and October she will be inspected. If, during the inspection the vessel is found to be affected by AGM she will need to be fumigated by a certified company. Until this procedure is performed the vessel will not be allowed to sail by the CoastGuard. The first inspection at Upriver is yet to be performed. We shall keep you posted.