Customs has announced that Friday 31st will be considered overtime and that Customs services charged on that ratio.

Berths and ports will confirm later on this week regarding work procedures and we will keep you posted.

Tugboat service: Tug boats are under a mandatory truce period imposed by the Ministry of Labor until max January 05th, 2022. At Necochea and Bahia Blanca service is rendered for 12 hours periods, each day, counting as from the first service of the day. Other ports are working normally while the truce lasts.

River Paraná/River Plate dredging and buoying: The award of the “short term” contract for River Parana and River Plate (Upriver/Recalada) buoying and dredging is expected to be announced shortly. This will be a short term contract for approximately one year until the longer term contract is announced and awarded. A this moment there are few details of the longer contract. It is expected to be for a longer period (15 or 20 years) and will call for improvements in the canal design. We shall keep you posted as news develops.

Covid-19 in Argentina “Omicron” and “Delta” variants: Infections are rising strongly again on both variants of Covid-19. Over the last week they have increased from an average 5,408 per day to 15,689 registered today, Tuesday 28th, counted nationwide. For the time being the Government is not wanting to re-introduce restrictions. Argentina had one of the strongest and longest lock-downs during 2020 and first half 2021. 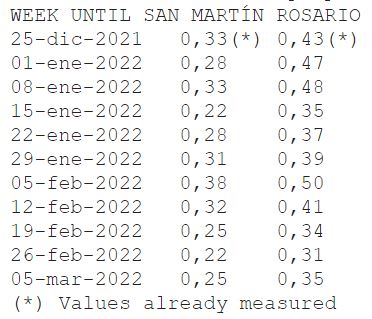 Crew changes in Argentina: Restrictions have placed on all persons travelling who originate or transit via Africa due to the detection of the “Omicron” variety of Covid-19.

This is still an ongoing and developing situation.

Incoming crew are now allowed to join vessels provided the proper Visa and Sanitary arrangements are made at origin principally as per below:

*Visas are issued prior entry at the corresponding Argentine Consulate for nationalities required.

The list of nationalities that require visas is available at: this link

*Full vaccination performed at least 14 days prior entry to Argentina

Tug Boat Service in Argentina: Tug boats still continue “working to rule” due to a wage dispute. Services are limited to 12 hours per day, every day of the week. Service is being provided between 0700 and 1900 or 0600 and 1800 hours depending on the port. This is at ALL ports except for Buenos Aires where the action has other characteristics. Negotiations remain ongoing.

Lacking any of above (besides all usual documents) pilots will not be allowed to board until a 14 day period is counted starting from the moment the last crew-member has boarded.
Will keep you posted.