National Holidays: Monday, February 15th and Tuesday, 16th, Carnival Holidays. Overtime charges for the Holidays will be as on Sundays.

San Lorenzo, Cargill Quebracho berth: The maintenance at this berth has been re-scheduled, again, for the period Thursday, February 11th until Thursday, February 25th 2021 and from March 08th until March 14th 2021. During these periods the berth will not be loading vessels.

Ramallo: Dredging work at the Bunge Terminals at Ramallo has been completed. Based on surveys performed after the work the draft is now 10.60 meters at datum. These surveys are yet to be confirmed by Coast Guard in order to determine the max drafts. Please follow our daily draft report for updates.

Truckers Strike and Pickets: At last, the pickets in Bahia Blanca and Necochea were lifted noontime today, February 09th. An agreement was reached this morning. First Bahia Blanca and shortly afterwards Necochea pickets cleared and access was allowed for the road transport to commence discharge into the silos and terminals. At Necochea shortly after midday vessels started entering port to berth and commence loading. The mv IOLCOS DIGNITY, the mv STENTOR, the KODIAK ISLAND and the mv GENEROSITY which had been waiting at Roads began berthing maneuvers.

Argentina/Brazil Maritime Traffic: The treaty that governed maritime traffic between Argentina and Brazil was denounced (voided) by the Brazilian government. Due to this, as from February 05th 2022 (in one year’s time) maritime traffic between Argentina and Brazil will be open to all vessels. This means that, unless something changes during that period, it will be no longer necessary to obtain “flag waivers” for cargo loaded between the two countries. Up until now the only cargoes exempted from this requirement were wheat, crude petroleum and iron ore. As from February 05th 2022 all cargoes will be open to all vessels. Further details will be available during the coming days.

Dredging River Plate: The Government has designated a consultative committee to study the dredging and opening of the new Canal Magdalena access to the River Plate. As can be seen on the diagram below the intention is to open up a new Canal at the entry of the River Plate that is southerly to the usual access via Montevideo-Recalada-Punta Indio. There have been periodic on-going debates regarding this project over many years. Some consider it to a waste of money and that the funds would be better invested dredging and widening the old canal. Those who favor the project consider that it will allow easier access to and from the Atlantic ports (Mar del Plata, Necochea and Bahia Blanca) and that the maintenance cost will be lower since the inward and outward flow of the tides will require less maintenance dredging. If the project goes ahead, it will require the establishment of logistical bases for servicing pilots, SAR and other such services on the Argentine Coast such as have been established at Montevideo. We shall be following the process and keep you informed. 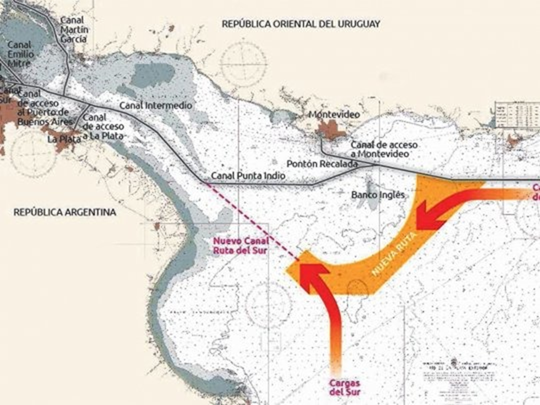 River Parana Draft: The volume of water in the River Parana continues rising steadily thanks to the rains in South East Brazil, Paraguay and Bolivia. This allows for an optimistic forecast for the coming three months when the sailing draft will be ranging over 10 meters.