We attach the updated River Paraná long term forecast based on data supplied by INA (National Water Institute). A small surge will produce a temporary improvement in River Parana water levels during the coming two weeks. After that the water will return to present levels. As autumn commences there is expected to be a gradual increase in the amount of water in the River. Please find below the rain fall registered between March 01st and 08th. 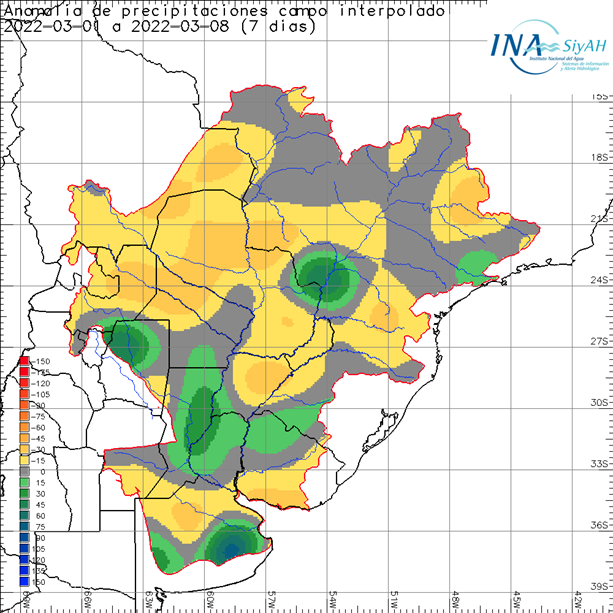 Grain and Markets from Argentina:

Grain markets are quiet with prices rising strongly but little business closed. The continued hostilities in the Black Sea area are placing 30 per cent of the world wheat exports under threat.

The combined export capacity of Russia and Ukraine, especially to short distance markets in the Mediterranean remains frozen in the short term.

The stevedore union in Bahia Blanca continues protests by stopping work for one hour each shift. The stevedores are wanting a wage increase and a bonus to be paid for work during Covid-19 pandemic.

Tugboat crews in Bahia Blanca are working on a similar pattern to Necochea. That is a 12-hour shift commencing with the first service of the day.

The bunker supply situation remains tight. The PAE refining plant at Campana is closed for scheduled maintenance and will not renew its usual production flow until end-March. Heavy fuels (VLSFO) are in very low supply. This refinery supplies approximately 20 to 25 per cent of the market demand. Add this to present very high bunker prices brought on by hostilities in the Black Sea area.