Attached please find the updated long term forecast based on data supplied by INA (National Water Institute). At the present time a surge is taking place with an improvement in the water levels and an increase in the maximum permissible sailing draft. Once the surge is over the longer term forecast is for a gradual improvement in the water level, but always within the very low draft levels we have been enduring during the last three years. Rainfall in the catchment area is still very short. Please see the updated weather map below. 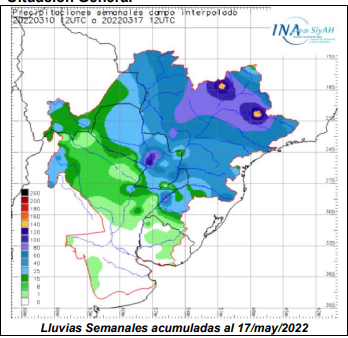 Further to previous reports. The call for a “short term” tender for maintenance and buoying on the River Parana has been declared void after the first stage left only one bidder standing. This was Jan de Nul. For the time being, and until a new tender is drawn up the maintenance dredging and buoy maintenance will be performed by Jan de Nul as they have since the end of the formal contract.

According to a report filed end of the last week Puerto Rosales is expected to export 400,000 metric tons of crude during March. The facility is being used for exports from the Vaca Muerta shale field. The crude from this field is in demand because of it’s very low sulphur content. The increase in demand at this terminal has brought on the need to transport crude in tank trucks from Vaca Muerta because the pipeline is at maximum capacity. Puerto Rosales has two off shore loading buoys and a third one is planned for the near future. One of the two buoys being used at the moment is also up for replacement. Puerto Rosales is located at the entrance of Bahia Blanca Bay.

A strike has been called out for March 25th at 00:00 hours until noontime Saturday 26th. The strike is organized by many unions that work in the port. Ocean going vessels will be affected by this stoppage because both stevedores and tug boat crews are joining. Please also consider, that as per above, Thursday 24th is a National Holiday. The strike is related to a series of disputes, mainly wage related.

At this moment the harvest forecast according to the Rosario Exchange is:
42,000,000 tons of soyabeans

Markets remain with small volumes traded due to the ongoing hostilities in the Black Sea area, added to this the uncertainty due to temporary export restrictions in Argentina and Indonesia.

Lacking any of above (besides all usual documents) pilots will not be allowed to board until a 14-day period is counted starting from the moment the last crew-member has boarded.
Will keep you posted.