San Lorenzo, strike: The Oil Crushers’ Union strike has been called into a truce for the rest of this week. A further meeting will be held on Monday for further evaluation. The issue at stake is the terms under which the laid off workers will have their indemnities settled. The wider problem is that the whole Union, in all San Lorenzo has taken up their cause and made a wider conflict of the situation.

Covid-19 Quarantine Restrictions (Update): With the onset of cooler weather (Southern Hemisphere Autumn) and the arrival of the “2nd wave” the Government is planning further restrictions on movement between provinces and entry through international borders. Details are still to be announced.
Bahia Blanca: Authorities at Bahia Blanca demand that all vessels proceeding from a foreign port perform a 14 day quarantine before being granted Free Practique and allowed to berth. The 14 days are counted as from the departure date from last port of call. Vessels proceeding from Brazil, Uruguay and Chile can be excepted from this 14 day requirement provided a permit is requested from Port Administration, and upon berthing a fumigation of the living quarters must be performed.

Necochea: At Necochea a 14 day quarantine period for vessels coming from foreign ports is required. Exemption is granted for vessels proceeding from Brazil and Uruguay after a formal request is made to the Port Administration.

River Parana Draft: The River Parana draft forecast is maintained at the present River level. An average of 10.40 meters is adjusted daily by the port authority. Rainfall over the “catchment” area of the River is returning to usual volume. There will short “dip” in the maximum permissible draft during the coming two weeks, but this will recover into mid-April and May. The below table, the latest issued by the INA (Instituto Nacional del Agua) of the Argentine Government shows that the River Parana level, measured at Rosario will return to over 2 meters by the end of March and therefore the usual maximum 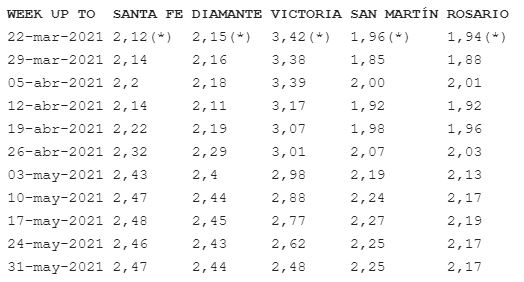 Buenos Aires, River Plate and Hidrovia: There is pressure being applied to include a significant deepening of the access to the port of Buenos Aires in order to enable the large “mega container” vessels to call at the port on a heavier draft. This will allow the vessels a rotation alternative in case they decide to skip calls at Santos when congestion does not allow them to meet the slots at the container terminals and so not modify their schedules at other ports. Buenos Aires is usually the last loading and discharging port where vessels rotate for “homeward” voyages. The dredging will also require work on the Canal from Recalada to Zona Comun.