Necochea and Bahia Blanca:Both Bahia Blanca and Necochea stevedores are demanding a 14 day quarantine for vessels calling at these ports. The 14 days are counted as from the day of departure from the last foreign port of call. This period to count even if the vessel has been granted Free Practique and called at another Argentine port. These are local issues and must be solved locally. Meetings with the unions have been held, but so far no agreement has been reached.
WE STRONGLY RECOMMEND THAT YOU CHECK WITH US BEFORE FIXING VESSELS ORIGINATING FROM BRAZIL, CHILE AND URUGUAY.

San Lorenzo, tanker affected by Covid-19: On Wednesday 24th a tanker arrived at San Lorenzo Roads coming from Madre de Deus, Brazil. She was granted Free Practique as per usual procedures and berthed on Friday 26th at ADM AGRO PGSM to commence loading operations. During berthing maneuvers one of the crew collapsed on deck with breathing problems. The vessel’s Free Practique was withdrawn and all the crew were tested for Covid-19. Six of the crew tested positive and the vessel was shifted to Roads March 30th and is being submitted to quarantine.

Covid-19 Quarantine Restrictions (Update): With the onset of cooler weather (Southern Hemisphere Autumn) and the arrival of the “2nd wave” the Government suspended as from Saturday 27th all flights originating from Chile, Brazil, UK and Mexico. The National Government has announced that all Government employees will revert to “home office”. Further restrictions are expected after Easter weekend.

River Parana Draft: The River Parana draft forecast is now revised downwards. Rainfall in the catchment area is below average for this time of year. Nevertheless the river level is expected to be able to keep the maximum sailing draft at about 10.10 meters FW. In the table below it shows that the River level at Rosario is mainly close to or above 2,00 meters which will allow the River the to return to 10.36 meters (34 feet 00 inches). 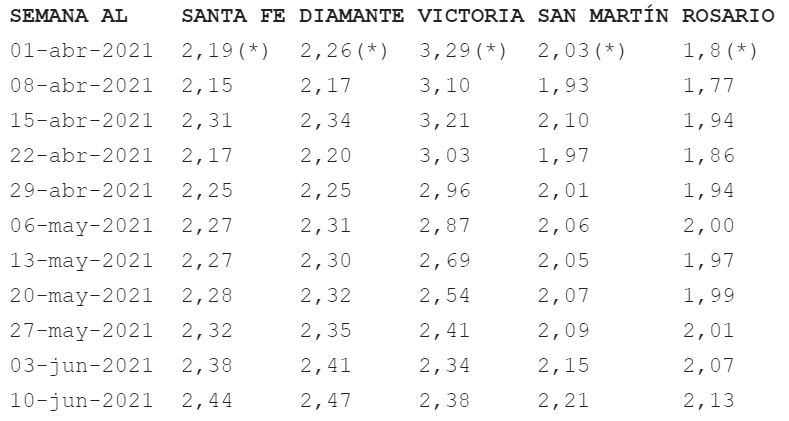 Wheat 2021/2021: According to a survey by the Buenos Aires Grains Exchange farmers intend to increase the sowing area dedicated to wheat in the coming season. The survey taken indicates that, if this year’s yield is maintained the total harvest could increase from 17 million tons in 2021 to 19 million tons in 2022.

Cargo Railways: The privatization contracts that have been in force since the early 1990’s are expiring as from the 2nd half of this year and into 2022. The system was an integral privatization of equipment and rail lines along the lines that had existed prior to the nationalization in 1948. The success was mixed with some lines being profitable, some being used for the purpose of their original owners needs and some being total failures and those being taken over buy the Government again. The system that is now being studied for the Government to take over the ownership of the rail network and allow the private companies to work on the rails basis a system of “open access”. At this moment there are three private companies offering services (NCA, Fepsa and Ferrosur) and one Government Company (Belgrano Cargas). The “open access” will principally be of use to the operators (all the private ones) that use the wide gauge network. The other two prevalent gauges, middle and narrow being operated by the Government company. Rail is still considered to be underutilized for freight ground transport, but all principal terminals in the Upriver and Atlantic area have access to railways. 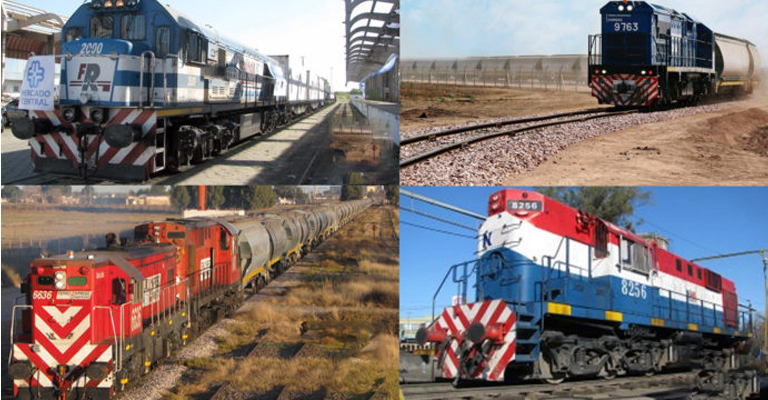