May 9th – Crew changes Prior Arrival in Argentine Ports

LNG: Argentina will again have an energy deficit this year, particularly gas. Some 47 shipments of LNG will be imported (37 already awarded and 10 to be tendered), for now.

Hidrovia: The contract with Hidrovia SA (Jan de Nul + Emepa) who dredge, buoy and manage the River Parana and River Plate (Recalada to Santa Fé) expired on April 30th. In a last minute move the Government extended it for a further 90 days. Tendering for a new management, hopefully with better design and depth is still stalled.

Tugboats: Crews are working normally since May 8th. The only exception is at Necochea port where tugs work 12 hours to count as from first service rendered during the day.

Bahia Blanca dredging: During the coming week two dredgers will start work in the access canal of Bahia Blanca. This is maintenance work and navigation is not expected to be interrupted.

River Parana Draft: Prospects for improvement in the maximum permissible sailing draft are not to be expected for the forthcoming months. It would be fluctuating around 9.70m. There is still very little rain in the catchments areas of South Brazil, Paraguay and Eastern Bolivia. Please see the map below.
Under this pessimistic scenario, the tidal ranges of the River Plate will be affecting the maximum sailing draft for Upriver ports as far north as San Lorenzo. This has been appreciated during the week where the River Parana had a temporary recovery. Reason: Persistent S-SE winds out at sea which filled the River Plate and caused a back-up effect. After this, regretfully, matters will be returning to what we´ve been seeing last week. 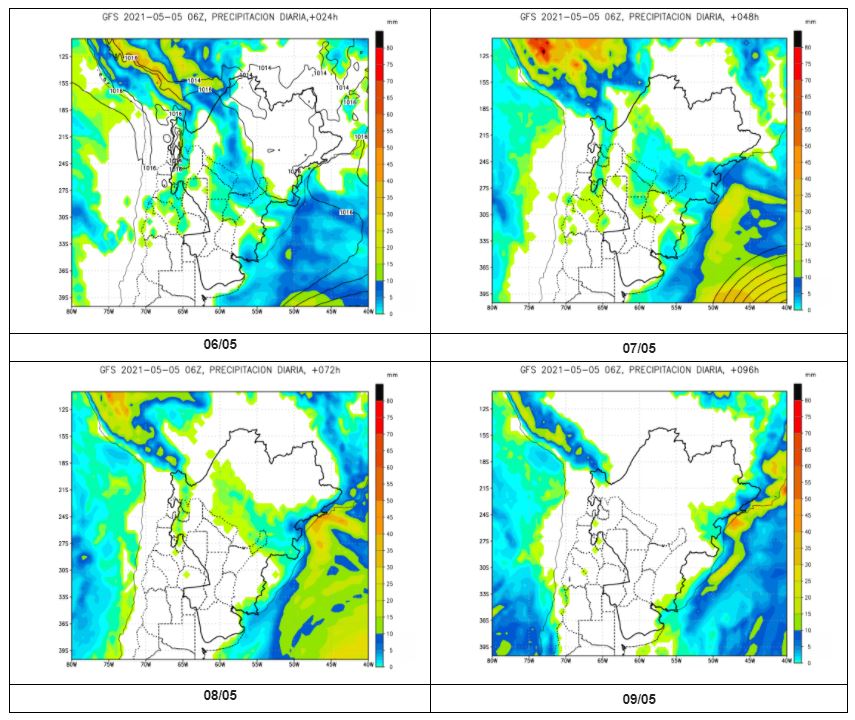 Covid-19 Quarantine Restrictions (Update): The second wave of Covid is arriving firmly in Argentina. The Government announced last Friday Apr 30th that the lock down will continue until May 21st. Schools are closed and no circulation in the streets is allowed between 2000 and 0600 hours. These measure affects Buenos Aires and also other cities. Maritime activity is not expected to be disturbed.

Asian Gypsy Moth Inspections in Argentina: Same as is happening in many other countries Argentina will also start implementing inspections on all vessels coming from Far East Pacific ports on account of Asian Gypsy Moth. The inspections will be performed by SENASA (National Animal and Vegetable Health Service) as from April 12th, 2021. All vessels that have called at ports in China, Koreas, Japan and Far East Russia within the last 24 months (2 years) will have to be reported by Agents to SENASA. If the vessel has called at these ports between April and October she will be inspected. If, during the inspection the vessel is found to be affected by AGM she will need to be fumigated by a certified company. Until this procedure is performed the vessel will not be allowed to sail by the CoastGuard. Inspections are usually performed while vessel is alongside and in daylight hours.