Crew changes in Argentina: The Government has advised that starting October 20th crew changes will be allowed in Argentina. These had been suspended since the start of the Covid 19 Pandemic. Details about the procedures for entry and departure have not yet been announced. We will keep you posted.

Necochea – Quarantine period: An agreement has been reached at Necochea and as from Friday October 01st THE 14 DAYS QUARANTINE ON VESSELS COMING FROM FOREIGN PORTS OF CALL IS NO LONGER REQUIRED. This brings the port back into line with the rest of the country.

River Parana draft: Water level in the River remains low and forecasts for the coming months are still pessimistic. The water level prognosis prepared by the National Water Institute (INA) as per below. 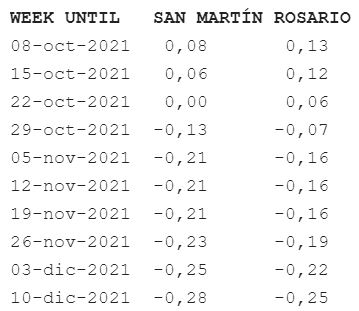 Grain imports: Jordan is in the market for 120,000 tons of barley over January and February dates (2022) and Turkey will be looking for 310,000 tons over November dates.

Ushuaia: Preliminary work has begun on the extension of the pier. This will allow further capacity for all vessels calling, specially cruise ships during the southern hemisphere summer as well as Antarctic supply vessels.

Bahia Blanca – Tug service: Tug boats are now working for 12 hours per day, every day. The 12 hour work period will be counted as from the first service of the day. After this period is finished there will be no further services during the next 12 hours. Necochea has been applying this procedure for the last few years. This is due to a wage dispute between crews and tug boat owners.

Scrubbers. The restriction to use open-loop scrubbers was regulated/prohibited on Aug 2020 (Disp 15/2020), but shortly afterward the application of this regulation was ‘suspended’ by the authority (Disp 20/2020). Therefore, at present time no specific regulation/restriction applies regarding the use of scrubbers in Argentina waterways, at least, until further notice. Besides scrubbers, any other wash water discharge is strictly forbidden in riverway and seaports and to be carried out as per MARPOL Annex V.

Crew changes made at previous port/s 14 days prior arrival in Argentine ports:esides many other documents and certificates, these below are of special concern: