ACA Timbues: The first vessel to load at ACA Timbues berthed Thursday 03rd. The mv HAKATA QUEEN berthed September 03rd noontime in order to lift about 35,000 metric tons of maize bound for Egypt. Because the equipment is undergoing it’s first effective operation the vessel is only loading in daytime hours. The operations started slowly but the systems installed have worked well. No probable ETS is yet reported.

River Parana Draft: There has been an always welcome increase in the maximum sailing draft from Upriver over the last few days. Over the weekend the maximum sailing draft was close to 34 feet. The reason for this nice draft was the SE winds that backed up the River Plate tides over a few days. The main problem is that there is still little or no rain the River Parana catchment basin in SE Brazil. 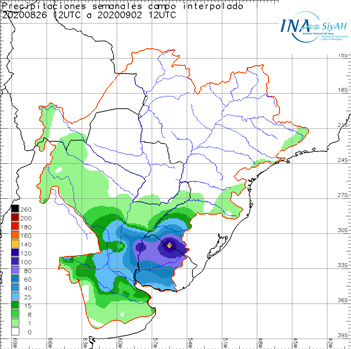 Crew changes Argentina: The borders remain closed and crew changes are not permitted. There is talk at the moment that flights in and out of Argentina may be allowed as from early October. Soonest we have news on this we will advise you.

Recalada: Recalada, and Zona Comun have closed due to swell, fog and high winds.

Necochea: The port has been open since September 03rd at 0730 hours. It had last closed on Saturday, August 29th at 1640 hours.

Necochea: All vessels arriving must comply with a 14 day quarantine. The 14 days are counted from the date of departure from the last foreign port of call, regardless of having Free Practique issued at a previous port of call in Argentina within the 14 day period.

Bahia Blanca: Pilotage service is suspended for short periods of time due to bad weather.